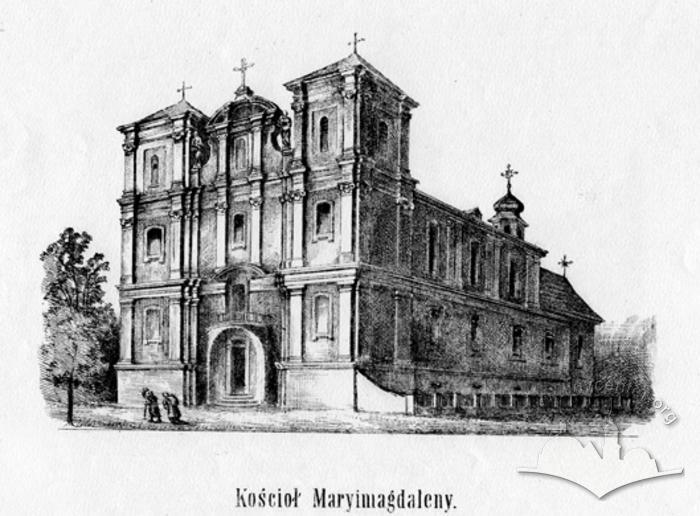 View of western and southern façades of the St. Mary Magdalene Church depicted before the church’s 1889 reconstruction, based on the project of architect Julian Zachariewicz. It was in the course of this reconstruction that the church’s towers received their present spires. The small original church was constructed in 1615-1630 by architects Jan Godny and Albert Kelar. The contours of this building can be seen in the altar part of today’s church, to which architect Marcin Urbanik appended the main three-nave body in 1753-1758. The view of the Church of St. Mary Magdalene as immortalized by the painter originates from 1784, when the church underwent another reconstruction. Sculptures by Sebastian Fesinger were placed on the building’s façade between towers with tent-shaped roofs. The main architectural accent was placed on the church’s main (western) façade – its clearly horizontally divided planes were decorated with pilasters in different orders: Doric in the first level, Ionic in the second, and Corinthian in the third. The smooth plane of the southern wall, with its clear rhythm of window apertures stands in contrast to the resplendent western façade.
Oleh Vvedenskyi