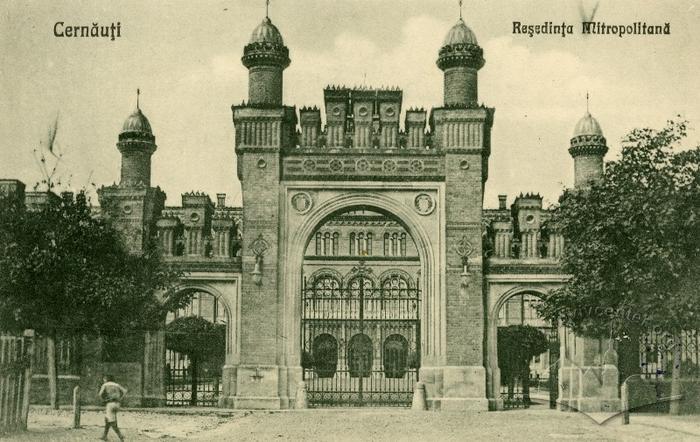 Entrance Gate to the Chernivtsi University

The postcard shows a part of the building and the entrance gate to the inner courtyard of the Residence of the Greek-Orthodox Bishop in Chernivtsi. From 1873 on he was the Metropolitan of the Bukowina and Dalmatia, being the head of all Orthodox believers in the Habsburg Empire. The impressive structure was buit between 1864 and 1882 and replaced an older residence from the 1780s. It sits on a hill overlooking the city. In the 1880s the top of this hill behind the gardens of the Residence got the name Habsburgshöhe. The driving force behind the project was Bishop Eugen Hacman, the architect was Josef Hlavka from Bohemia. The necessary amount of 1,75 million Guilders came mainly from the funds of the Greek-Orthodox Church of the Bukowina (Griechisch Orientalischer Religionsfonds). The ensemble in moorish-byzantine style consists of three wings which surround an inner courtyard: the central Bishop’s residence, the Seminary with a church to the left and the monastery on the right side. Behind the Bishop’s residence there is a large private garden. The postcard shows the entrance gate to the inner courtyard and parts of the central buildung with the balcony of the Synodalsaal (synodal hall) and the monastry on the right side. After the second Wold War the Bishop moved to Romania and the building, which was severely damaged by fire during the war, was handed over to the University of Chernivtsi, as main building of which it serves until today.
Helmut Kusdat