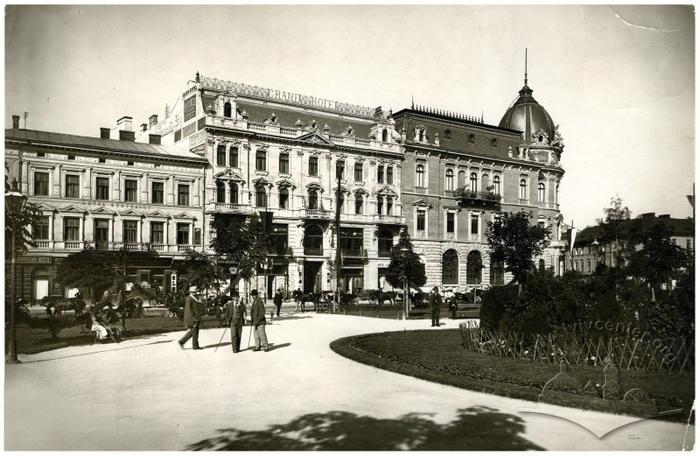 Depicted here is the parade square of the central promenade of Karl Ludwig st., which came about at the end of the 18th century after the dismantling of the city’s fortifying walls. The flower-bed in the foreground existed on this spot until the construction of the monument to King Jan Sobieski III. The newly created street, received the name Lower Bulwarks during the beginning of its existence. Already in the 1920s it became a favourite spot for Lvivites to stroll, especially after the fixing of the square on the area where the Poltva was directed underground. The street connected Mariatz and Holukhovs’yi squares and formed as a continuation of the Lviv salon: Akademichna st - Mariatz sq., - Karl Ludwig st. On July 30, 1855 it was named in honour of the Austrian Duke Charles Louis Frederick (Herzog Carl Ludwig) brother of emperor Franz Josef I, who during his stay in Lviv in 1853-1855, lived in the building of the Land Credit Society. The even numbered side of Karl Ludwig st. was called upper, odd numbered – lower. During the regular ordering of the streets of the city in 1871 the even numbered side received the name of Hetman st., odd – Karl Ludwig st., from 1919 – Legions st. The city boulevard between the future streets of Hetman, Karl Ludwig and Mariatz sq., formed around 1820 on the spot of the former fortifications. In 1859 the oldest monument in Lviv– the sculpture of Hetman Stanislaw Jablonowski, done by an unknown author, was transferred to the Bulwarks. Then, the long alley, which occupied a square of 1 hec., received the name Hetman’s Bulwarks. After the final burial of the Poltva in 1888-1890, the Bulwarks were rebuilt, widened, decorated with flower-beds and alleys of chestnuts, maples, acacia. At the turn of the century, with the construction of a new city theatre and monument to King Jan Sobieski III, the Hetman’s Bulwarks received their final actual appearance. The image is made up of stone castles on the even side, between Sykstuska (now Doroshenka) and Yahellon’ska (now Hnatiuka) streets – № 11, 13, 15. № 11 – “Central” Hotel, later “City”, built by the architect Emanuel Hall in 1881-1884. At the beginning of the 20th c. the well-known confectionery of Alexander Bieniets’kyi was located here. № 13 – luxurious in those times, “Grand – hotel”, built in 1893 by the architect Erasmus Hermatnyk and sculptor Leonard Markoni. The building was completed by the architect Sigmund Kendzers’kyi, who repeated the joining of the hotel, through its gates, with the Hausman passage, as had been done with the preceding building on this spot. For many years the confectionery of the exceptional Lviv confectioner Leopold Rotlender was located in the preceding building, of which legends circulated even during his lifetime. № 15 – building of the Galician savings-bank, built by the known Polish architect, professor Julian Zakharevych on the spot of the “English” hotel.