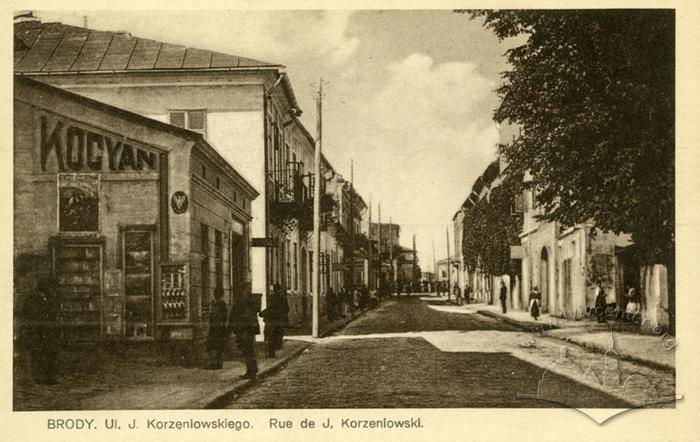 The picture presents a fragment of one of the central streets of Brody – J. Korzeniowskiego street (the street’s oldest known name was Kościelna (“Church”); it was known in Soviet times as Stalina, and later as Lomonosova street. The street’’s today’s name is Vasylia Stusa). In the foreground to the left is a single-storied building, which housed the shop of Władysław Kocyan(a second story has subsequently been added to the original building). Kocyan was the owner of several shops, selling paper, stationery, newspapers, postcards, and similar items. He started his business in Brody before the First World War, and led it until 1939, and under the German occupation. Kocyan was one of the largest orderers of postcards with views of Brody, which today serve as valuable documents telling the story of the city’s landscape in the first third of the twentieth century. Kocyan left Brody in 1944. A Jewish primary school functioned in a two-storied building behind Kocyan’s shop. The structure of the church towers on the right side of the street, opposite the shop (only a fragment of the fence and part of the crown of the linden-tree (still there to this day) are visible). Further on, beyond Filipa Cukra (now Schurata) street, and to the right, is a building, which no longer exists today, and beyond that is the now reconstructed three-storied house. Korzeniowskiego was always a busy street, leading as it did, from Rajkówka park to the Rynok (“Market”) Square. Further on down the street, we can see the two-storied building protruding to the right – this is the structure of the seventeenth-century Dominican monastery, which before the Second World War, stood on the south side of the Rynok square.
Vasyl Strilchuk