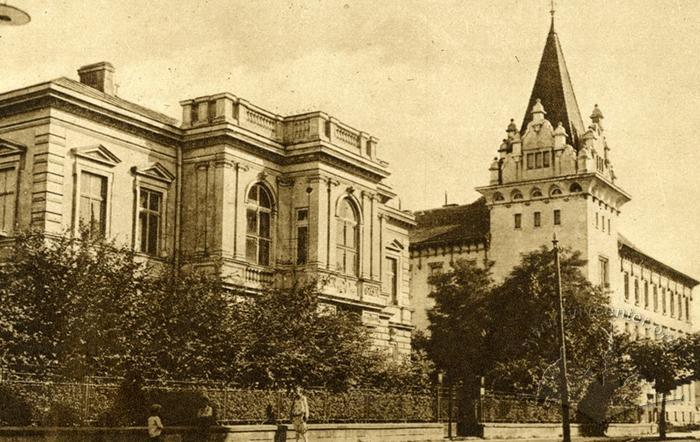 The buidlings of the Trade and Industry Chamber and the County Court were constructed in the late nineteenth-early twentieth centuries in the eastern part of Brody’s historic city center, in Wały Nowe (“New Bulwarks”) Street (also known as Wały Wolności, or “Liberty Bulwarks”). The Wały Nowe street ran along the upper part of the seventeenth century earth defensive bulwark of the city (now part of M. Kotsiubynskoho street). The Trade and Industry Chamber in Brody was founded in 1850, and was active until 1929. The building for this institution was constructed in the late nineteenth century. After the institution stopped its activities, the buidling became home to a two-year trade school, which was later reformed into a Merchant Gymnasium. After the arrival of the Soviet authorities in 1939, the buiding housed the Incomplete Middle School No. 2. In the years of the German occupation, the premises were taken by the Brody County Administration (Landkomissariat). After the Second World War the buiding was again used for educational purposes – in 1945 the building was given to the Brody Middle School No. 2 with instruction in Russian. The building was occupied by this school until 1977, after which it housed the primary classes of the Brody Middle School No. 1. Today the building is home to the Brody First Degree General Education School No. 1. The building of the county court was constructed in 1911 in place of an older nineteenth century building. The buiding’s project was developed by Z. Slyvynskyi, construction headed by M. Dąbrowski. The building’s interiors were changed in 1915, with part of the premises taken by preliminary detention cells, in addition to the actual court. The building performed its original functions (court, prosecutor’s office, and jail) until the end of the Second World War. In 1945 the building of the former county court was given to the Brody Pedagogical Institute. New buildings were added to the original premises in 1996, and in 2002 a Pedagogical College was created on the basis of the original Pedagogical Institute, taking the name of Markiyan Shashkevych in 2003.
Vasyl Strilchuk