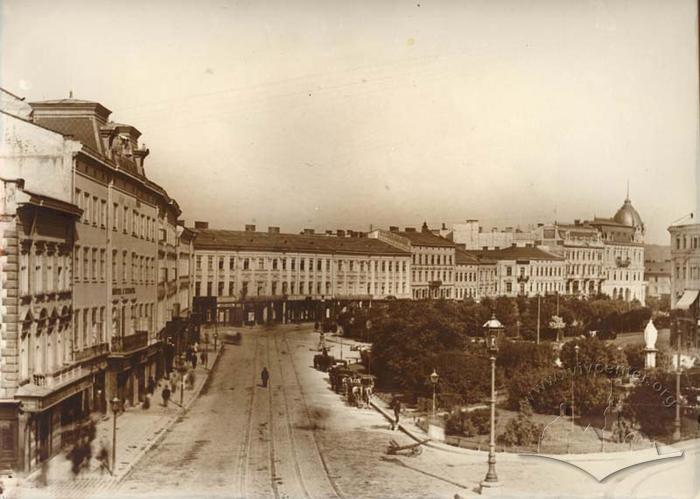 View of Mitskevycha square from the South

A view of Mariacka Square from the south. To the left are buildings No. 3, 4, 5, 6-7. The Haussner building, No. 1-3 in Karl-Ludwig Street (now Svobody Boulevard), can be seen in the background, as well as a set of rails for the tram that took passengers from the Train Station to the General Country Fair, held in Stryiskyi Park in 1894. In the centre of the square is a green area, centred around a well with a fountain, crowned by a white marble statue of Our Lady. The statue, sculpted by the Munich-based sculptor Johannes Nepomuk Hautmann was presented as a gift to the city in 1862 by Countess Seweryna Badeni, wife to the viceroy of Galicia. Around the green area the railway for electric trams can be seen, which were introduced in the square in 1894. The west side of the square, a station for private hansoms, one of several allocated by the city administration, can be seen by the green area. Several lamp-posts surround the green area: the lower ones are gas lamps, while the taller ones are old-style electric lamps.