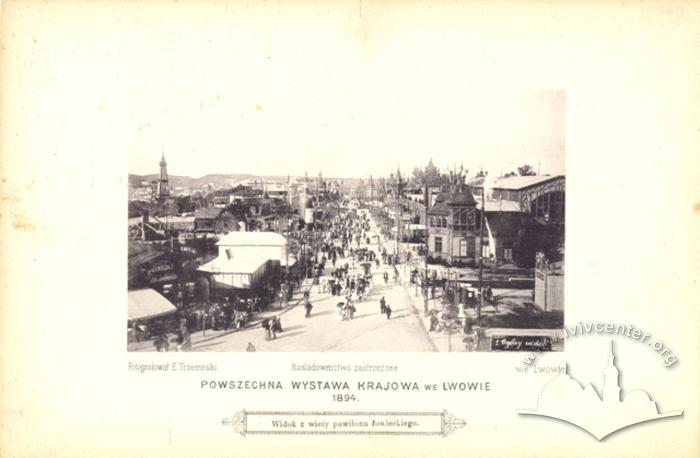 View from tower of hunting pavilion

The general view of the Regional exhibition central alley from the south to the north, heading main entrance. On the left: in the foreground there is Jankowski’s restaurant; cable railway station buildings; oil section buildings; L. Proux & G. Kondratowicz enterprise (the successor of "Couriere & Cognac Co., France") pavilion. This was one of the most extraordinary pavilions of the exhibition, built by Franciszek Czech’s project, made in the form of a bottle with the diameter of 3.54 m, the height of 15.1 m. Later, after World War I, such an idea was used by the famous Lviv Baczewski’s liquor and vodka factory – the tower of Baczewski’s pavilion was made of original company bottles. In the background on the alley there is a light and music fountain. On the right: in the foreground we can see Gollob’s printing house pavilion (its iron construction was made by a Lviv firm of Piotrowicz & Schuman), hunting pavilion (architect M.Luzecki), machine pavilion, where machines, driven by water, steam, gas and electric current power were displayed. The pavilion was constructed on archduke Albreht’s factory in Cieszyn.