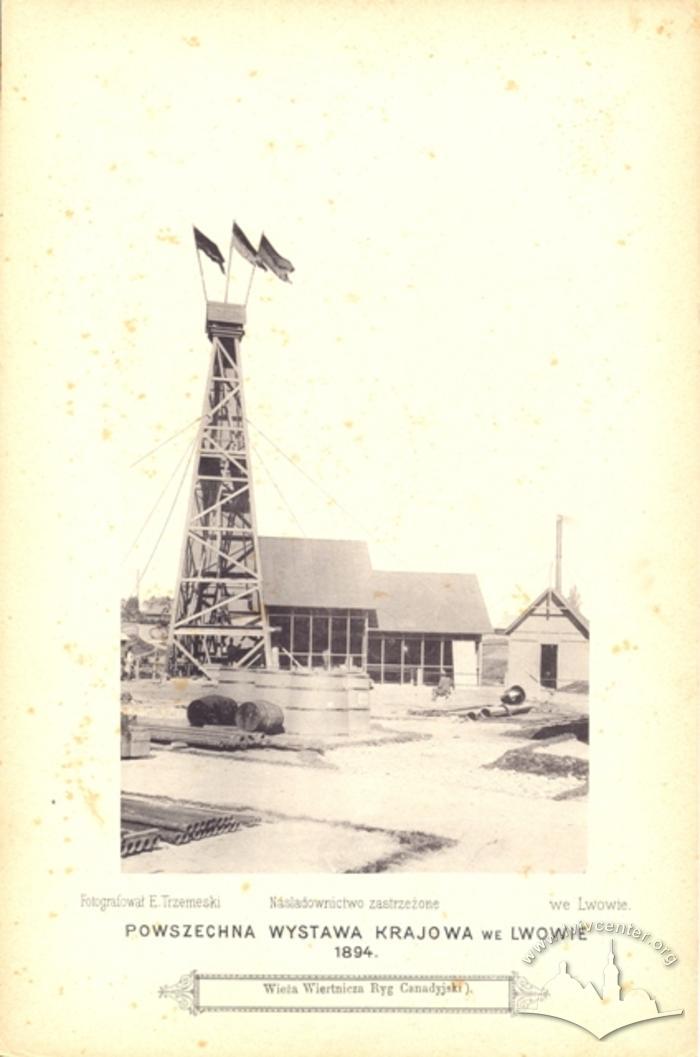 The view of the oil section of the 1894 Regional exhibition, situated on the vast area behind Baczynski’s restaurant, in the siuth part of the exhibition, near the central alley. In the foreground there is a derrick of the so-called Canadian boring. The buildings of this project were designed by architect Pekarski. The section was composed of: businessmen Berheim and Mac-Harvey's pavilion (Mac-Harvey was the first in Galicia to introduce the Canadian boring system), Canadian tower, forge, boring equipment store, earth wax pavilion, oil credit society pavilion. The oil section was visited by Emperor Franz Joseph, accompanied by the organizers of the exhibition and the head of Oil society August Gorajski during his visit to Lviv on September 8, 1894. On September 12-13 within the framework of the exhibition the International boring technicians congress took place. Specialists from Sweden, Belgium, Hungary and Australia (!) took part in the congress. Besides other accomplishments of the boring industry from May 15 to October 23 1894 a system of Canadian machine boring was displayed. The upper part of Stryyskyy park, where the derrick was, was situated on the height of 343 m above sea level. Deep boring was started with a bore with the diameter of 474 mm, and finished in half a year’s time with a bore with the diameter of 145 mm, which reached the depth of 501 m. Soil samples were taken every meter (500 samples all in all). First, a two meter layer of clay was bored through; then layers of sand and lime of different geological epochs. On the depth of 501 m the organizers decided to stop due to the impossibility of boring through a layer of chalk. The works were done by August Goraj's and Adam Trzeczielski’s company under the supervision of engineer W.Remiszewski.