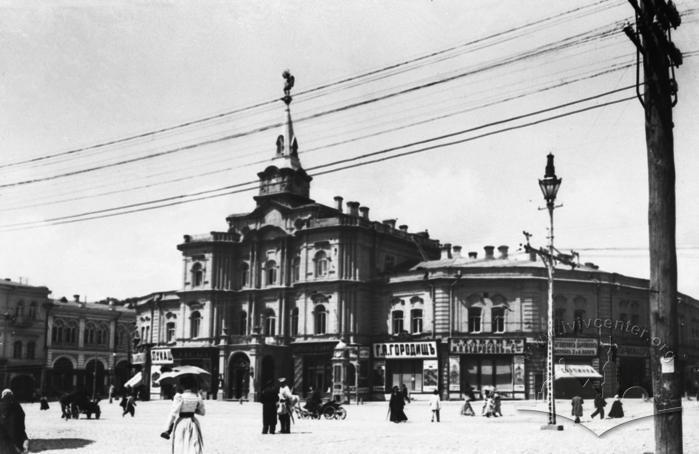 The building of the Kyiv City Duma

The building of the Kyiv City Duma, constructed in 1876, six years later after this institution became an elective body and resumed the nature of self-government (now the Maydan Nezalezhnosti square). This building indicates the co-existence of administrative, commercial, educational, and public functions in the space of a single structure. The ground floor was occupied by shops; profit from the lease of the shops was going to the city treasury. The assembly hall and the city administration rooms were located on the first floor. Certain premises were held by the famous Murashko’s drawing school and a medical night duties post. In the 1890s the third floor was added on the whole building’s perimeter. The building is planned in the shape of an unbent horseshoe. On the tower spire, there is a statue of Archangel Michael with a sword in his hands; it is the patron of Kyiv and a symbol of being ready to defend Kyiv’s self-government (a reference to the Magdeburg Rights which were lost by the city). The Archangel Michael, made by Yeva Kulykivska, a sculptor, was replaced by a red star not long after 1917.

The 1880s-1890s photo indicates also a rather free pedestrian area which was strictly divided into a pedestrian part and a carriageway; to a certain extent, this fact indicates that the area had the nature of a square rather than that of a street. On the left one can see a rather tall gas lantern post, which had a more refined shape in contrast to others; it was a kind of marking an area for the elite.