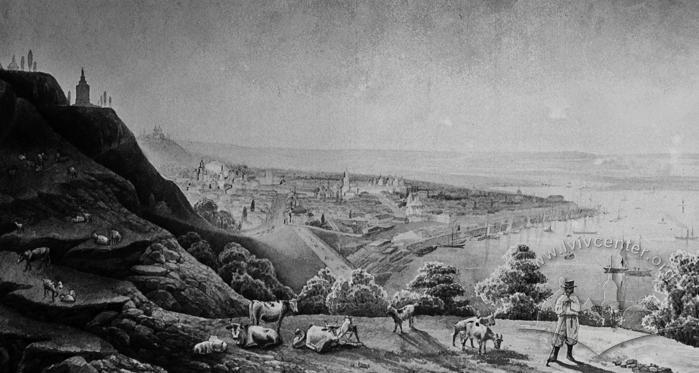 View of Podil from the Pechersk

A Mykhaylo Sazhyn’s watercolour with a view of Podil representing an idyllic image of Kyiv. It is interesting that in the same year the author also created a “realistic” drawing from the same angle; comparing the two pictures, one can single out some elements of his romantic image of the city. Where the Merchant Assembly park (now the park where the Peoples Friendship Arch is situated) was arranged in the mid-nineteenth century, a shepherd and some oxen with big horns and goats are shown against the background of wild nature. Instead of a chaotic view of the industrial harbour, an almost empty bank and approaching boats – in particular some sailboats – are depicted there. The author highlights the outlines of churches and belfries while in reality the silhouette of the city was already shaped by row housing.

Oleksandrivsky (now Volodymyrsky) Uzviz, filled with transport of one or another kind, is hidden, wild precipices depicted instead. Stylistically, the drawing is divided into black chutes and a lowland, Podil being represented as a separate town situated at some distance. The monument to St. Volodymyr can be seen atop a hill on the left; one can also see the All Saints church located far away on the Shchekavytsia mountain.