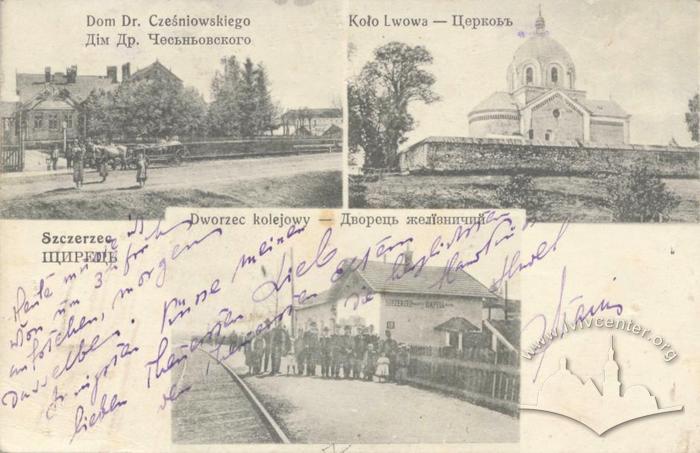 Typical for the 20th c., the postcard of the type “Gruss aus...” presents three typical views of Shchyrets. Until the war there were two railway stations in Shchyrets- “Shchyrets- city” and “Shchyrets-II- Islands” (they have existed up until now). On the wood block wall of the station building bilingual signs are visible with the name of the station: Shchyrets (in polish) and Shchyrets-city (in ukrainian). During the expansion and electrification of the iron line of Moscow-Chop, the station was destroyed in the 1950s. Nativity of the Virgin Mary Church was built on the hillside, where, possibly, the city was located in the 12th c. After a number of Tartar attacks the church was only rebuilt in 1662. It gained its current appearance in 1892. For the reconstruction of the Shchyrets church of The Nativity of the Virgin Mary in the 1920-1930s, donations were gathered, which was a traditional way of collecting charitable donations.