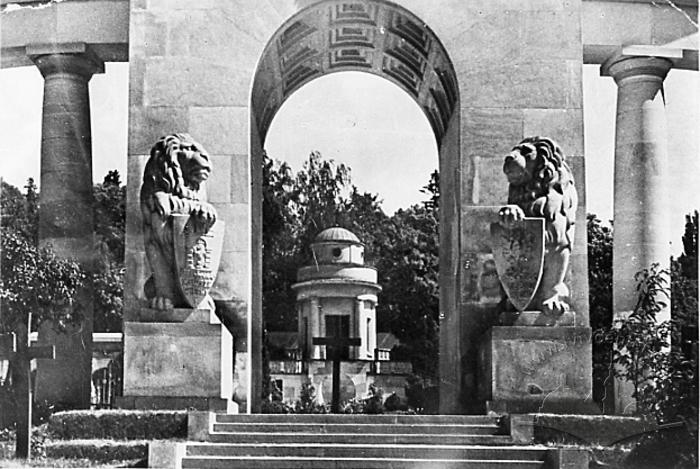 The photograph depicts the Lwów Eaglets Memorial Complex at the Lychakiv Cemetery. The Lwów Eaglets (Orląta Lwowskie) is the name the Polish historiography uses to refer to Poles, who lost their lives in the tragic events of the Polish-Ukrainian war of 1918-1919. The earliest burials on the site date back to November 24, 1919. The cornerstone of the chapel was laid in 1922, the chapel itself was completed and consecrated in 1925. The project for the memorial was developed by Rudolph Indruch, Assistant Professor at the Polytechnical Institute. The central alley rose through three semicircular burial “terraces” to the middle plateau with regular rows of graves. 2,859 soldiers, including three American pilots, and seventeen French infantrymen are buried at the Eaglets Cemetery. The Glory Monument consisted of a triumphal arc with two figures of lions and twelve doric columns set in a semicircle, closed by low monumental stellas. Construction works at the memorial lasted until 1939 and were never completed. In the years of Soviet government, the memorial was almost completely destroyed, with the graves run into the ground and covered with soil, and architectural elements demolished. Restoration of the complex began in 1989, and it was finally ceremoniously opened after reconstruction in 2005.
Oleh Vvedenskyi