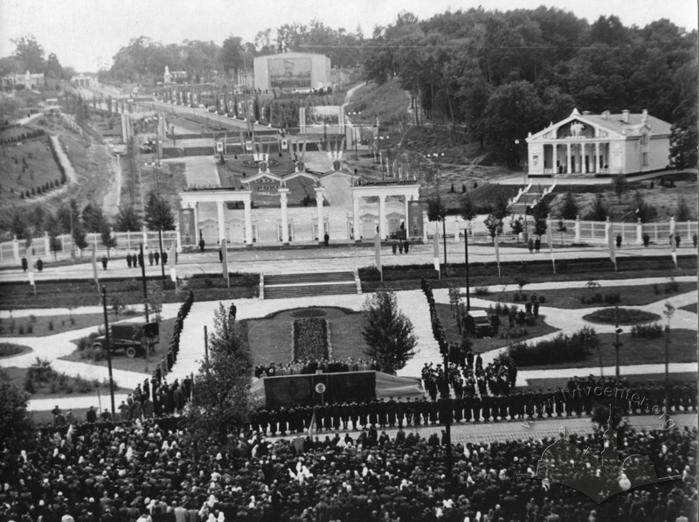 The photograph depicts a demonstration to celebrate the opening of the Fourth Regional Agricultural Exhibition at the Bohdan Khmelnytskyi Park in October 1954. The 26-hectare park was laid between Stryiska, Hvardiiska and Vorovskoho (now Zarytskykh) Streets in the early 1950s. The huge “folk construction effort” turned the waste spaces on the slopes of Kadetska Hill into an organized recreational space, the Bohdan Khmelnytskyi Central Culture and Recreation Park. Part of the park’s territory had belonged to the Skaters’ Society in the early twentieth century, functioning as a skating rink in the winter, or as tennis grounds in the summer. The place where today a stadium stands once held clay pits and a brick yard. Higher up, remnants of the Stryiske Cemetery can be seen. The arched main entrance (by architect Henrykh Shvetsko-Vinetskyi) from the side of Dzerzhynskoho (now Vitovskoho) St., and the Druzhba (Friendship) Cinema are typical architectural exemples of Stalinist Empire style. The park’s central alley proceeds upward from the main gate to the upper terrace, where exhibition pavillions had been constructed. The alley, framed by hedges of garden and park plants, created several intermediate terraces, one of which held monuments to Lenin and Stalin, situated symmetrically. To the right of the alley is thte building of the summer Green Theater with its main stage.
Oleh Vvedenskyi