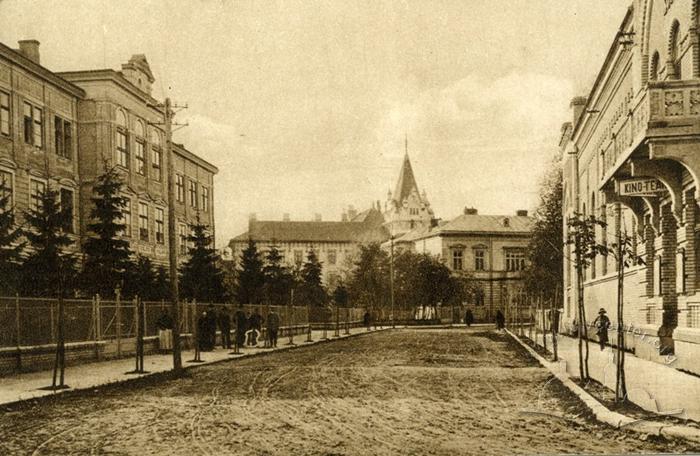 The new building of the Crownprince Rudolph Gymnasium (school) in Brody (left in the picture) was constructed in place of the old military casernes in 1883. The building arose by the remnants of the former earth bastion of the seventeenth-century defensive city bulwark, along which ran a street eventually known as Wały Gimnazyjne (“Gymnasium Bulwarks”, part of today’s M. Kotsiubynskoho Street). In the interwar period the educational institution was known as the Józef Korzeniowski State Gimnasium – Korzeniowski was a famous Polish writer and teacher, hailing from Brody. In Soviet times the building served as premises of a middle school. From 1997 onwards this was the Ivan Trush Gymnasium. To the right in the picture is the façade of the Polish Sports Society “Sokoł” (“Falcon”) (today the building of the district National House), which in 1912 began housing the city cinema, as is evident from the advertizement. Further down the street, the building of the Trade and Industry Chamber (today’s Brody General Education First Degree School No. 1) can be seen, followed by the spire-topped structure of the county court (now Markiyan Shashkevych Pedagogical College in Brody). The buildling of the Gymnasium is fenced off from the street, and surrounded by firs (neither the trees, nor the fence exist today). The sidewalks of the street, which outlines part of the former bastion, are paved and planted with trees. Although the present postcard was published in 1929, the picture was created circa 1914, as evident from analogous views of the time.
Vasyl Strilchuk