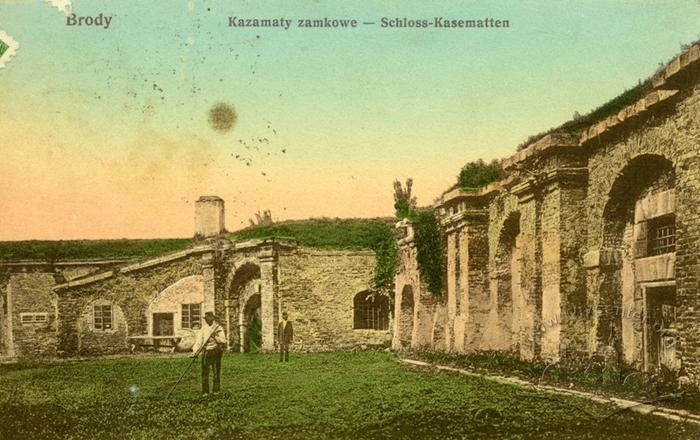 Casemates of the Brody Castle

The Castle of Brody was built in 1630-1635, after the project of the famous French engineer Guillame Lewasser de Boplan, and funded by city landowner Stanisław Koniecpolski. The castle’s layout was that of a regular pentangle. The fortifications consisted of five bastions and five curtins between them, which had 75 casemates inside the earth bulwarks. The bulwarks, paved on the outside with hewn stones, were surrounded by a deep ditch. The castle was accessible via a drawbridge and gate built in one of the curtins. In 1812 the castle of Brody was demolished by the Austrians, by demand of Russia. The entrance gate with its tower, the adjacent curtins and bastions, and the escarp-frontedwalls of the earthen bulwarks, were blown up, the ditches covered up, the ravelin demolished. The postcard depicts part of the preserved casemates of the eastern curtin, as well as the corner casemate with remains of the apparel (smooth descent from the bastion) of the Brody Castle. A chimney towers above the eastern curing, where formerly the kitchen had stood. In the early twentieth century, the castle’s casemates were used as storerooms. The entrances to the casemates were blocked by wooden doors, and the windows were grated. A park was situated in the castle’s grounds by the palazzo of Countess Jadwiga Źyszczewska, which was probably tended to by the castle’s servants (we can see grass being mown in the picture).
Vasyl Strilchuk