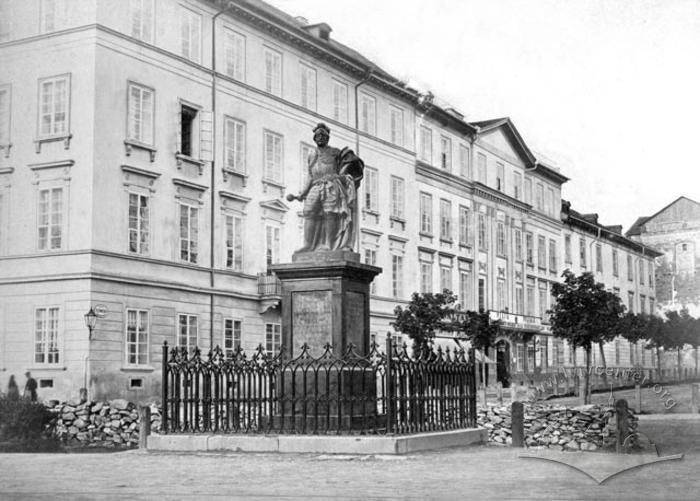 The oldest Lviv secular monument to Hetman Stanislaw Jablonowski, the defender of Lviv against the Tatars (1695), was constructed approximately 1752-1754. According to Y. Biryulyov the sculptor was probably Sebastian Fesinger. The statue of the Hetman originally stood in the courtyard of the old JesuitCollege, his mortal remains having been buried in the Jesuit church. During the restoration of the church the monument disappeared but was accidentally rediscovered by a journalist (Hippolyt Stupnitsky) in the middle of the 19th century in the backyard of house № 13 in Karl Ludwig Street. At the public expense the monument was restored by the sculptors Paul Eitel and Leopold Schimser and in 1859 it was erected in the city boulevard / street. Since then these places were called "Hetmanski Valy" (Hetman Ramparts) and "Hetmanska" Street. In the background there is a house which used to stand in "Tekhnitska" Street (nowadays "Nyzky Zamok" Street). Today there is a small market here known as "Vernissage".