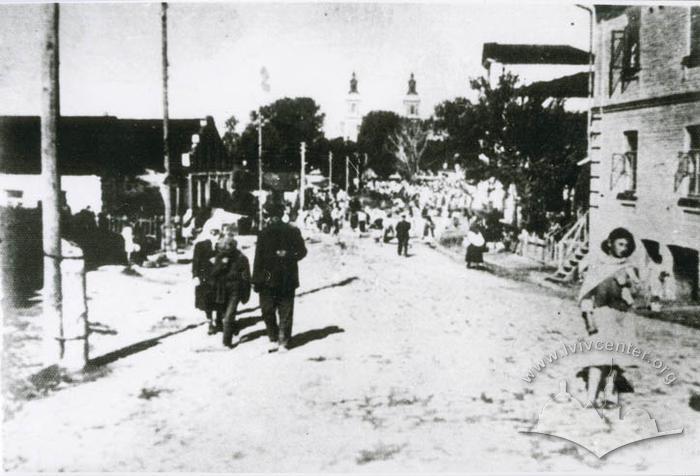 The photograph represents the perspective of Naberezhna Street and the Old Market, behind which one can see the silhouette of St. Anne’s Cathedral. On your right are the buildings that have been preserved to the present time. The district of lowlands near the place where the PloskaRiver flows into the Southern BugRiver had been called the OldCity for generations. It is here that in the 15th Century the settlement called Ploskyriv emerged from which the history of the town of Proskuriv has started (presently the city of Khmelnitsky). The Old City’s population consisted mostly of Poles who in the second half of the 17th Century on the site of the former wooden Ploskyrivsky castle built St. Anne’s Cathedral – first wooden, and then since 1820 - out of stone. In the 19th-first half of the 20th Century the city’s market operated on the square in front of the Cathedral, that’s why all this area was sometimes called the Old Market. Naberezha Street connected the market square with the city center; it was first called Mala Buzska Street, and in 1965 it was renamed after the Red Cossacks officer V. Prymakov.
Serhiy Esiunin