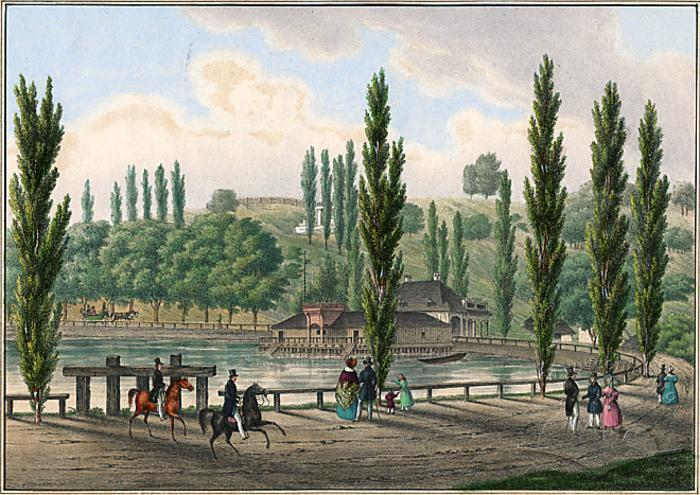 The southern foot of the Poznańska Hill was skirted by a creek flowing out of Vulka, which formed a small pond. The land plots were owned by citizen Andrzej Pełka, who gave his name to the pond, known as Pełczyński/Pelchynskyi. The Lviv chronicles hold a curious mention of this place, according to which it was once home to “a vodianyk (water-deity) who made boots for all the vodianyky of Lviv”. From 1820 onwards the basin was used as a military swimming school. The building of the swimming pool was constructed in 1821, based on a project by architect Wilhelm Schmidt. In 1843 the Pełczyński pond was the site of a “sea battle”, when fully armed and dressed infantry- and cavalrymen performed military routines in the water. A theatrical performance was held on the pond in 1845, with all proceeds from it going to benefit victims of a recent flood. A grand fairy-scene was staged for the amusement of Lviv’s residents, depicting picturesque characters in boats (“Turks”, “Negroes” and “Sailors”), who battled sea monsters (the serpents, crocodiles, whales and sirens were especially crafted from cardboard). The performance created an indelible impression on the residents, and was reflected in the contemporary press and literature. The pond was drained in 1915, and covered with soil in 1921.
Oleh Vvedenskyi