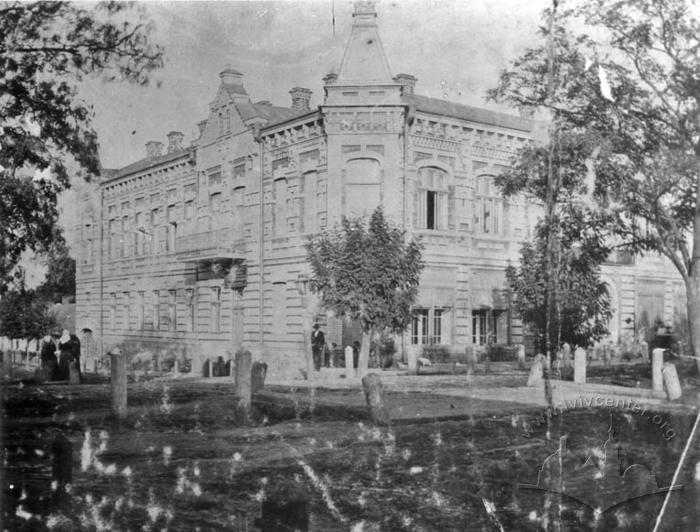 This building on Alexandrivska St. (presently - Proskurivska) was constructed in 1903 by a merchant named David Nirenberg for the Proskurivske Branch of the South-Russian Industrial Bank. The South-Russian Industrial Bank was one of the leading joint-stock commercial banks; its branches provided services in all more-or-less significant towns of the Russian Empire. In 1908 the South-Russian Industrial Bank merged with a couple of other banks, after which the entity was called the "United Bank"; all of its branches were renamed correspondingly. In a smaller part of the building D. Nirenberg opened a hotel named "Venezia", which during the civil war functioned as the headquarters for various military detachments that held the city. After the Soviet power was set up in October of 1920, the building of the bank was nationalized and transferred to the possession of various Soviet establishments. In the 1950’s it hosted the Oblast Executive Committee, during the 1960’s it was used by the Party City Committee, and in the 1970’s it belonged to the editors’ office of the oblast newspapers "Radyanske Podillya" and "Korchaginets". Since 1986 the Proskuruvskyi Regional Art Museum has displayed its expositions here.
Serhiy Esiunin