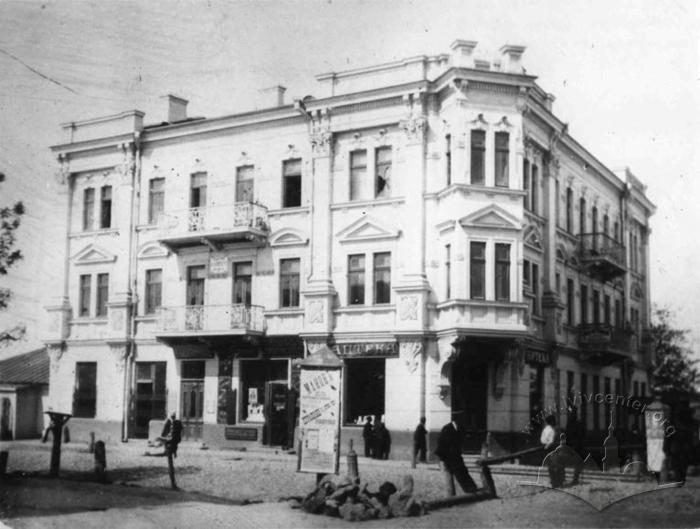 The building was constructed in 1890 by a wealthy nobleman named Ludwig Ivanovych Derevoed who had a very good reputation in Proskuriv (presently the city of Khmelnitsky). It seems sufficient to mention that as of 1881 he was elected spokesperson for the City Council for thirty years in a row. He was well known in Proskuriv as the owner of the best pharmacy in the city. In the beginning of the 1870’s, the nobleman L. Derevoed obtained the necessary education and title of “pharmacist,” after which he opened a private pharmacy in a single-story building on the corner of Alexandrivska Street (presently – Proskurivska St.) and a narrow side street. The side street later got its name – Aptekarska Street (presently Proskurivskogo Pidpillya Street) – from his pharmacy. In 1890 L. Derevoev finished constructing a new three-story building, the first floor of which was occupied by the best pharmacy in town. A store of a consumer company was also located on the first floor; the basement was used by the vinery “Rheinskovy pogreb”; the second and third floors were rented out. During Soviet times, the L. Derevoed building was nationalized, the pharmacy stopped existing, and the building mostly housed military and state establishments. At the beginning of the 1970’s the fourth floor was added. The building has been preserved to the present day; it hosts the inter-city telephone communications center and other departments of “Ukrtelekom.”
Serhiy Esiunin