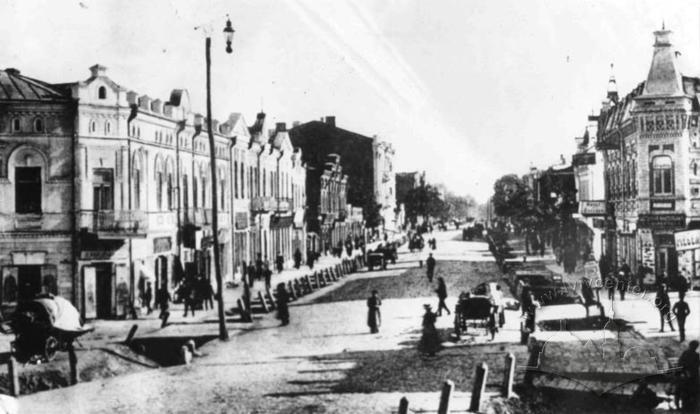 In the picture, one can see the beginning of Alexandrivska Street, which since the second half of the 19th Century has become the central street of Proskuriv (presently the city of Khmelnitsky). This one of the oldest streets in the city emerged in the 15th Century as a part of the road to Letychiv. At the end of the 18th Century it formed as a city street, and after 1824 it was named after the Russian Emperor Alexander I – Alexandrivska Street. In the 1890’s two and three-story brick buildings filled up this street. On your right you can see a rental house, the second floor and attic of which were occupied by "Silva" hotel; its first floor was used by small shops ("Bulochna" – breads and buns shop, "Mebli" salon – furniture store, etc.), brush repairs (the entrance is under the corner oriel) and G. Golovanewski’s photograph shop. On your left there is S. Barak’s rental house; gas water and pastry shop was located on its first floor, as well one of the best stores in the city dealing in ready-to-wear clothes owned by L. Rosenbaum. The street is stone-paved, one can notice sewage gutters along the sidewalk with bridges over them, in the foreground there is a gas lantern on a tall poll. Today Alexandrivska Street is named Proskurivska and remains the central street of the city. The buildings depicted in the photograph have been preserved to the present time.
Serhiy Esiunin