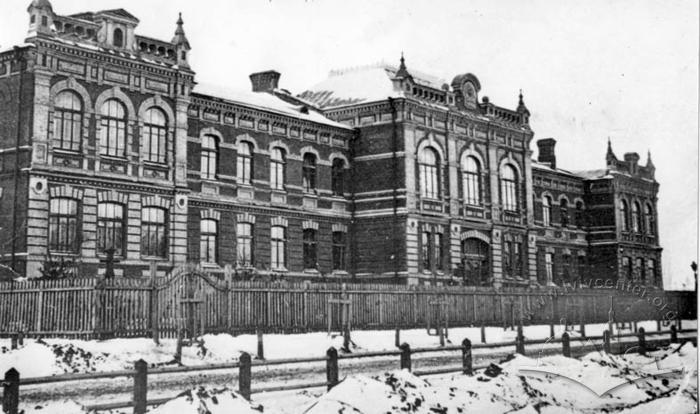 In 1900 a decision was made to organize a technical college in Proskuriv. Soon the construction of a two-story building for the new educational establishment was started on Starobulvarna Street (presently Gagarina Street). The grand opening of the college took place on June 1, 1904; the establishment was named Alexievske College after the heir of the Russian throne, Prince Alexiy. The technical college offered 6 years of studying and provided graduates a secondary education with a technical focus. About 300 students could attend the college at one time. During the years of the civil war of 1917-20 the establishment did not work consistently, and therefore the students sometimes did not finish the complete course of studies. The Ukrainian writer Mykola Trublayini (1907-1943), the author of widely known literary pieces such as "Lakhtak" and "Columbus Schooner", was among the last graduates of the school. From the first days of Soviet power the technical college stopped existing. The following years its building was occupied by a school and later by Communist Party and Komsomol establishments; since 1986 the City Executive Council has been using the premises.
Serhiy Esiunin