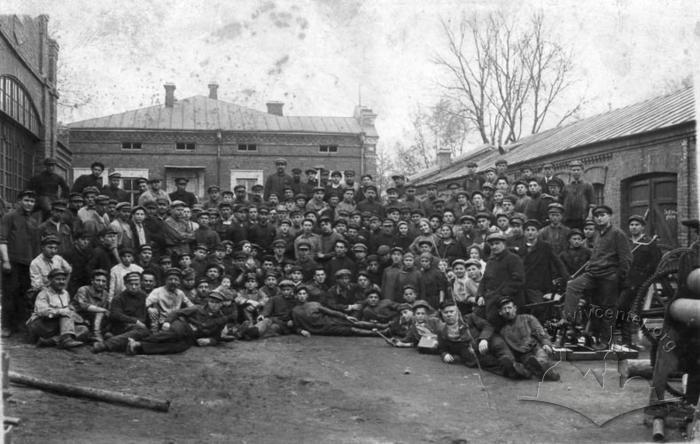 Workers of the Ashkinazi Iron Foundry and Mechanical Plant

Proskuriv Iron Foundry and Mechanical Plant belonging to Beirish Ashkinazi was put into operation in 1898. The plant specialized in manufacturing various products out of metal, equipment for mills, vineries, breweries and sugar factories, as well as well pumps of their our construction. In 1905 the plant’s products were awarded a golden medal at the exhibition in Paris. In 1921 the enterprise was nationalized and included in the Soviet National Economy as the state iron foundry and mechanical plant (abbreviated "mekhanzavod" – that is, mechanical plant) that manufactured founding products and agricultural equipment. In 1935 the mechanical plant was named after the Communist leader Kuybyshev, and in 1946 the enterprise was re-focused as machine-tool construction plant. In 1961 it was named the Kuybyshev Blacksmith and Pressing Equipment Plant. Since the 1990’s the plant has been called "Prigma-pres." The first buildings of the old plant have been preserved to present days.
Serhiy Esiunin