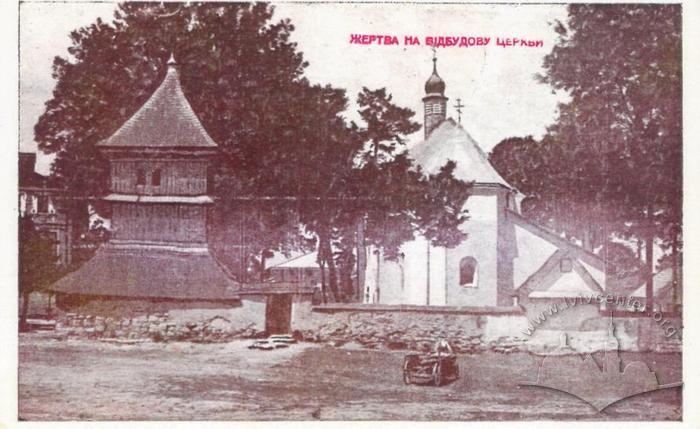 For the rebuilding of churches donations were collected, which was the traditional method of collecting charitable donations. Upon recognition of any donation, of any sum, the doner received a postcard with views of Shchyrets’ (in this case Holy Trinity church) and the text “For the reconstruction of the church”. Holy Trinity church was situated in an old town location, it dates from the 16th c. Like the church of the Nativity of the Virgin Mary it was once built with three wooden domes on stone walls. In 1805 following a government decree, Holy Trinity Church was rebuilt—belltowers removed, and in their place on the two-tiered top a small signal tower installed. The church was surrounded by a stone wall – possibly, in medieval times this wall was a part of the city’s defence fortifications. A wooden belltower from the 18th c. is part of the wall. After WWII the church was closed, and from 1977 a museum of atheism existed here. Only at the end of the 1980s was the church returned to the faithful. In the 1990s the UGCC community, to whom Holy Trinity Church belongs, rebuilt the cupola close to its original appearance.
Andriy Kryzhanivskyy