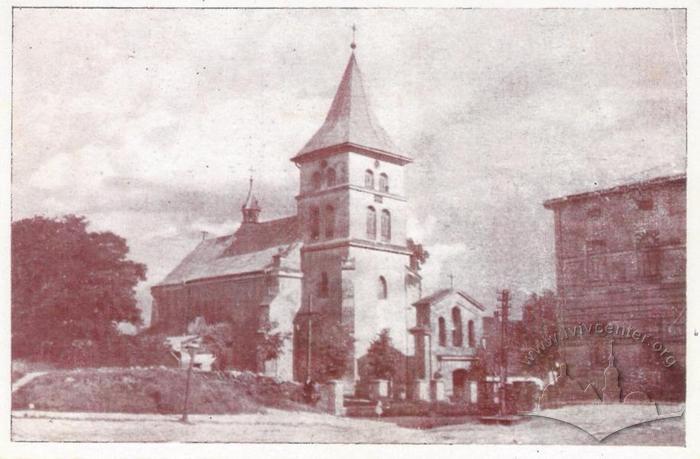 The church of St. Stanislav was built in 1400, a Roman Catholic parish existed already in 1397, when Shchyrets’ acquired Magdeburg right. According to the traditions of medieval urban planning the church was situated on the corner (south-eastern) of the central market square. This temple was a part of the city fortifications and the perimeter of the walls had battle loopholes and a stone .... for the defenders. During the church restoration in 1912 (for the celebration of 500-years since the Grundwald battle) these stone testimonies to the military past were walled over. The renewal and restoration were realized according to the re-worked project of Juzef Hornunh; the author of the completed project was probably Woitsekh Brettner. At that time they rebuilt the tower, ruined in 1834, on which in 1910 a memorial board of black marble had been put, on the occasion of the 500 year anniversary of the Grundwald battle, with the words “Grundwald Memorial 1410-1910”. In 1934 a memorial board was hung at the church entrance on the occasion of the 500-year anniversary of the death of king Vladislav Yahaila; on it was written “For King Vladislav Yahaila on the 500-year anniversary of his death the city of Shchyrets shows respect 31 May 1934”. In front of the church- belltower with arched openings, where the bells “Yan” weighing 100 kg, “Florian” 183 kg and “Stanislav” 500 kg, were located.
Andriy Kryzhanivskyy