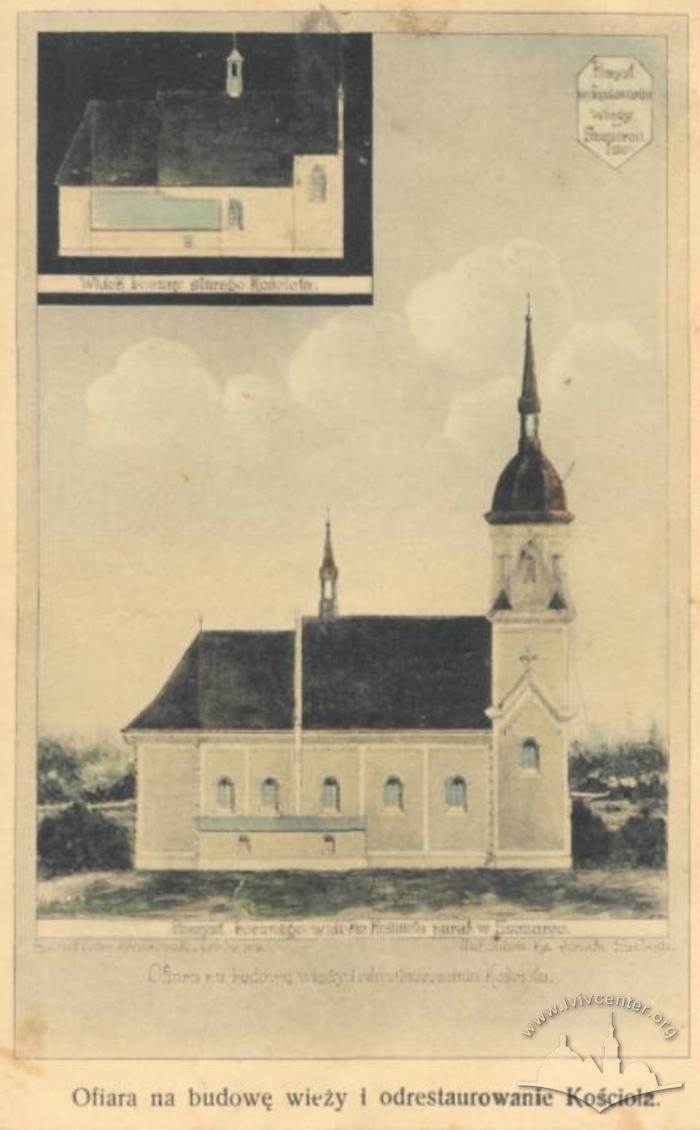 The typical method of collecting donations for the needs of the church were “tseholky”- postcards, which were marked for doners. On the picture- a project, one of the variants for the reconstruction of St. Stanislav church. Most likely, the postcard was put out with the goal of fundraising during the reconstruction of 1910-1912. The church of St. Stanislav was built in 1400, a Roman Catholic parish existed already in 1397, when Shchyrets’ acquired Magdeburg law. According to the traditions of medieval urban planning the church was situated on the corner (south-eastern) of the central market square. This temple was a part of the city fortifications and the perimeter of the walls had battle openings and a stone .... for the defenders. During the church restoration in 1912 (for the celebration of 500-years since the Grundwald battle) these stone testimonies to the military past were walled over. The renewal and restoration were realized according to the re-worked project of Juzef Hornunh; the author of the completed project was probably Woitsekh Brettner. At that time they rebuilt the tower, ruined in 1834, on which in 1910 a memorial board of black marble had been put, on the occasion of the 500 year anniversary of the Grundwald battle, with the words “Grundwald Memorial 1410-1910”. In 1934 a memorial board was hung at the church entrance on the occasion of the 500-year anniversary of the death of king Vladislav Yahaila; on it was written “For King Vladislav Yahaila on the 500-year anniversary of his death the city of Shchyrets shows respect 31 May 1934”. Even today the functioning church of St. Stanislav is one of the few Roman Catholic temples in the Lviv region, which functioned during Soviet times.
Andriy Kryzhanivskyy