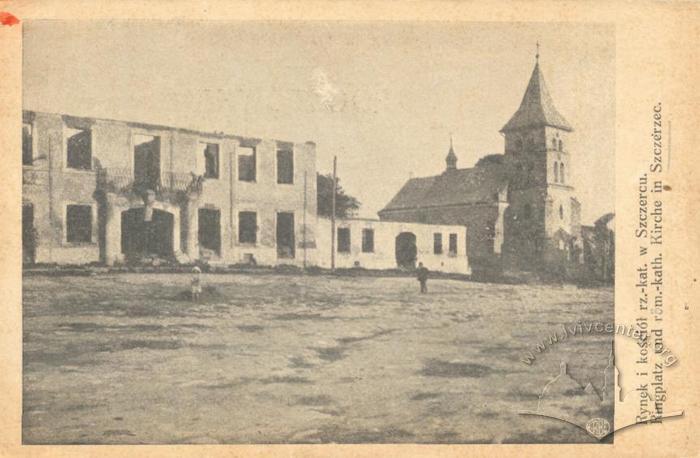 A view of Market square after the bombardment of 1915. On the “Yosefinskyi map” of Galicia, put together by the Austrian General headquarters in 1779-1782, the town hall is clearly portrayed as well as its surrounding buildings. The central square with the town hall structure in the centre was built up with two-floored buildings. Considerable ruin during the First and Second World Wars completely changed their architectural appearance. St. Stanislav Church was built in 1400, a Roman Catholic parish existed already in 1397, when Shchyrets’ acquired Magdeburg law. According to the traditions of medieval urban planning the church was situated on the corner (south-eastern) of the central market square. This temple was a part of the city fortifications and the perimeter of the walls had loopholes for the defenders. During the church restoration in 1912 (for the celebration of 500-years since the Grundwald battle) these stone testimonies to the military past were walled over. Until today the functioning church of St. Stanislav is one of the few Roman Catholic temples in the Lviv region, which functioned in Soviet times. Nowadays, the needs of the faithful Catholics are served by franciscan fathers from the Lviv church of St. Anthony.
Andriy Kryzhanivskyy