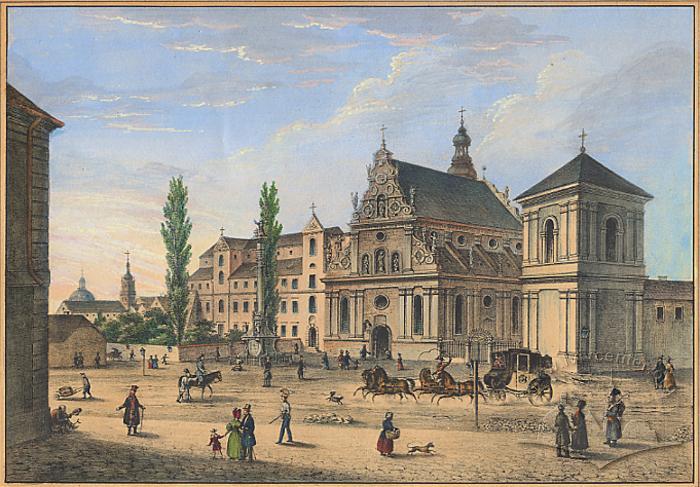 The picture presents the western part of the architectural ensemble of the Bernardine Church and monastery. The magnificent monument of old Lviv unites the characteristics of Renaissance architecture with clearly defined mannerist tendencies. The aesthetic tastes of the period favored decorative resplendence, dramatized expression, and striking monumentalism. Construction of the earliest buildings of the Bernardine monastery complex outside the city walls began in 1460. The buildings of the Church and Monastery complex were repeatedly rebuilt after numerous fires and ruinations. The cornerstone of the Bernardine ensemble as it is known today, was laid in 1600. Construction of the church, monastery, and fortifications (elements of which remain to this day) took over thirty years. The city chronicle provides us with the name of the author of construction plans, one Bernard Avelides, a monk. Avelides’ plans were implemented by the famous architect Paolo Romano, after whose death construction was supervised by Ambrose Przychylny. The three-nave church was 57.5 meters (about 189 ft) in length, and over 22 meters (about 73 ft) in height. The church’s façade holds an elegantly-shaped shield. The lower and upper levels were joined with scrolls, whose protrusions (as well as the wall niches) hold sculptural figures. The decorative forms display the influence of North European Mannerism. To the right is a monumental two-storied tower ending in a tent-like covering, which was constructed in 1734. Behind the church is the belfry-tower with a clock by A. Bemer, who was also the author of the sculptural décor of the façade.
Oleh Vvedenskyi